Do You Need To “Cleanse”? and Brownie Truffle Recipe 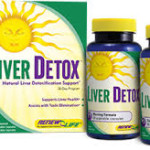 I get asked about “cleanses” and “detoxes” all the time.  Are they necessary?  I think so.  Our liver, which burns more calories and fat than our muscles, our brain, or any other part of our body, ( it’s about 60% of our total metabolism), is responsible for constantly cleaning our blood.  It’s supposed to clean 2 Quarts of blood EVERY MINUTE.  Imagine that.  Now imagine these numbers:

Liver disease in the form of Non-Alcoholic Fatty liver disease, liver cancer, hepatitis, and pediatric liver disease is affecting 1 out of 10 Americans.  That’s manifested conditions; the liver is struggling for YEARS before an actual diagnosis.  Liver disease completely compromises the livers ability to do it’s jobs.  What happens then?  A lot, because the liver is involved in just about every function in the body.  Here’s a list of symptoms:

Thanks to a Standard American Diet, and tens of thousands of chemicals in our food, water, and air, a good liver cleanse is a good idea.  How to do it?

Quit eating and drinking toxins!!  This is the number one, most important step you can take.  There’s no pill, no program, no magic anything that will replace that step.  Honest.  Let step 2 be eating and drinking Liver Loving Foods:  lemons, parsley, cilantro, garlic, sulfur/cruciferous vegetables(brussels, cabbage, onions, kale..), TONS OF WATER, fermented vegetables, keifer, and kombucha.  Want to get really special?  Eat liver, real or freeze dried, take milk thistle, get Vitamin D from the

sun( that’s easier on your liver than supplement form),  and use turmeric and curcumin when you cook.  Want to really get in there and make things happen?  Get in touch with me.  Detoxing is an old and complex art, a good one can make a big difference in how well your body works.

Will you lose massive weight if you do a Cleanse?  No! That’s just savvy marketing, appealing to dreams of fast, easy, effortless weight loss.  There are Cleanse/Detox products that will make you poop; No Amount Of Pooping Pulls Fat Out Of Your Fat Cells.  Ever.  Will you be healthier? YES, absolutely! 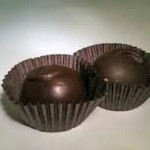 Let me leave you with a dessert my daughter Meg made the other night, Paleo Brownie Truffles – DELICIOUS, and liver friendly! (Thank goodness, because I ate them all in 2 days!)

4) dip balls in chocolate and refrigerate until shell hardens

How bout some Fun Facts about Butter before I show more Food Pictures?  Good butter is definitely a “Real Whole Food”, one that’s been used by traditional, healthy cultures for thousands of years.  Between 1920 and 1960, heart disease skyrocketed to the number one cause of death in the U.S.  Butter consumption, between 1920 and 1960, plummeted from 18 lbs per person, per year, to 4 lbs per person, per year.  Look at those numbers again and ask yourself where our Health Gurus got the idea that Butter is Bad, and a cause of heart disease.

Butter is loaded with the fat-soluble vitamins, A,D, E, and K, in their most usable and absorbable forms.  These vitamins support the Thyroid gland, the Heart, the Immune System, and several other places in our body.  Vitamin A and D are critical for the absorption of calcium, and vitamin K2 (which the cows make in their stomachs from the K1 in grass) is critical for making sure the calcium goes into the bones and teeth, where it belongs, and not in the arteries, the eyes, the joints, etc, where calcium doesn’t belong.  Butter’s a good source of iodine; it also contains short and medium chain fatty acids that have strong anti-bacterial/anti-viral properties.

Butter from cows raised on grass is much more nutrient dense than butter from grain fed cows.  Interestingly, the vitamin D levels in the butterfat are actually reflective of how much sunlight the cows get, just like us!

And finally, butter doesn’t make you gain weight.  Your body uses and utilizes the nutrients (all the fats and vitamins) butter provides.  Any spare tires around your middle are usually the result of grains, hydrogenated oils, excess sugar, and chemicals masquerading as food products.   Your body USES the nutrients from Real Whole Food to build and to repair.

That said, we eat a lot of butter in this house, mostly Kerry Gold, and sometimes I make it from cream I get at my dairy.  Want to make vegetables taste great?  Add butter.  Even the pickiest eater will cave.

Ready to switch gears to Food Ideas:  here’s some meals from the past couple of days: 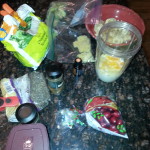 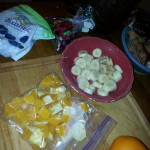 I always use frozen fruit and frozen greens instead of ice.  Here’s a pic: frozen oranges, bananas, blueberries, and cranberries. 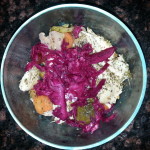 Over to the left is one of my lunches:  left over chicken, carrots, brussels, onions, with sea kelp flakes and a plop of fermented beets that I got at Wegmans in the “healthy aisle”.  Got to get in your bacteria! 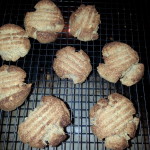 recipe is from Elana’s Pantry, but I’ve messed with it.  I only use butter in cookies, even when it calls for coconut oil, bc I like the taste better.  I doubled the recipe, and used half chunky peanut butter and half chunky almond butter. And where she uses honey, I use Swerve – I LOVE that stuff!

Okay, I’m going to throw out something some of you may think is weird, and I’ve debated about disclosing this, but the last picture is my crock of Kombucha.  If you’re not already drinking it, surely you’ve seen bottles of Kombucha in the store?  It’s fermented tea, and to ferment, it needs bacteria, actually, it needs 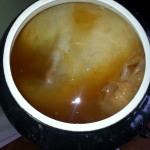 a SCOBY which means Symbiotic Culture of Bacteria and Yeast.  That’s what the yucky thing on top it.  Before you think that’s going to far, know this, we have over 100 TRILLION bacteria cells in our body. We’re supposed to have 3-5 POUNDS of bacteria just in our colon alone (party trivia fact)!  Current science has shown that we’ve really done an awful job maintaining and nurturing our bacterial “Micro-biome”, and we’re paying for in weak immune systems, mental problems, heart disease, skin issues, and I could go on and on.  Know this:  we need as much good bacteria as we can get, and homemade Kombucha is a traditional food/drink that’s been used since 212BC to do just that.

That’s it for now.  You can see why I don’t get hungry between meals, I eat too much fat and too many nutrients for that to happen.  Eating Real Whole Food everyday can be challenging at first if you’ve had years of fast, easy, thoughtless Processed Food.  Honestly though, a few weeks of effort in planning, shopping, cooking and packing, and it’s not an effort anymore, it’s a habit.  You’ll think differently, and what starts as hard becomes easy and normal.  I promise.  Nurture your body, give it what it needs to be healthy, to feel energetic, to stay well.  Your weight will normalize, your moods will stabilize, you’ll be stronger, less prone to illness, and if you start cooking for your family, your children will reap those same benefits.  Our body is made from trillions of cells that get made out of the foods we eat.  It matters what those foods are.  Be a Real Whole Foodie.