Got Bloat? Reflux? Gerd? Ever heard of SIBO, or Small Intestinal Bacterial Overgrowth?   You know how I say that Stomach Problems Aren’t Normal, and if you’ve got bloat/gas/cramps/reflux/constipation, don’t medicate it, FIX IT?  That’s because these symptoms are the beginning of and signs of much bigger problems: leaky gut, migraines, auto-immune conditions, decreased immune function, obesity, skin problems, etc etc.  If your digestion’s off, you’re in trouble, and it’s not because you’re deficient in antacid.

Not ENOUGH stomach acid is the problem for most people, and it becomes too low because it’s effected by so many things:  birth control pills, pain meds, OTC meds and prescription meds, obviously Antacids, chlorine/fluorine in municipal water, STRESS/CORTISOL, and sugar/refined flours/chemicals in foods.  Mess with the pH of the stomach, and all downstream gut function is compromised.

One thing that can happen is the Small Intestine, (which should hold anywhere from zero to a “few bacteria”/up to a million), develops an OVERGROWTH of normal bacteria ( not necessarily the bad stuff,  although they can and do proliferate if there’s insufficient acid to kill them). Another possibility? Studies show that LARGE INTESTINE bacteria (which numbers about 100 TRILLION) can migrate UP to the small intestine.  AHH!!  Not good, they don’t belong there.   Why would they do that?  The pH environment is off, so undigested and slow digesting carbs/sugars are not being absorbed properly in the small intestine. They call to those Large Intestine bacteria like cookies call to you.  Eat me eat me… How do you know if this is happening?

BLOAT’s a big sign.  There should be NO fermentation that causes bloat/gas/pain/cramping in the small intestine.  The small intestine is for digestion and absorption.   Fermentation is ONLY supposed to happen in the Large Intestine, which was set up and designed for it.

If you’ve got any of these stomach issues going on, and you follow the advice to “eat more fiber”, you’re probably NOT noticing any improvement.  The fibers (there’s several types), which are undigested/hard to digest Carbs, are just feeding that Small Bowel Overgrowth. On the other hand, if everything’s NORMAL, fiberous foods and slow digesting carbs shouldn’t bother you.

What about constipation, could that be a result of SIBO?  Yep.  MMS stands for Migrating Motor Complex, that’s contractions in our intestines that move food and SWEEP THE AREA CLEAN OF THINGS THAT DON’T BELONG.  MMS is impaired by Stress/Cortisol and eating too often.  Do either of those ever happen to you?

If you’ve got Bloat/Cramps/Reflux/Diarrhea/Constipation/GERD, you need to Heal and Seal your gut.  It’s not difficult, but it can take a while to normalize and repair damage, months. Your body wants to return to normal though, so you’ve got that on your side.

Changing the subject, how about No Recipe Food Ideas, with pictures?

This first picture is Stuffed Potatoes:  bake the potatoes for an hour, scoop out the insides and mix with bacon, butter, cheese, broccoli, and broth or milk, rebake for 15 minutes.  Kids love this one!

Next is a mix of Broth, Sausage, Onions, Carrots, and 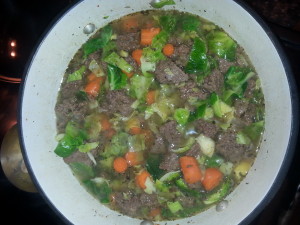 Brussels, tons of herbs, salt, and pepper.  No Recipe, no measurements.

Last is a meal I made for Shelby after a late practice (wet fields, everyone’s sharing the gyms), of chicken sausage, roasted potatoes (from a previous meal, frozen), and broccoli (frozen), that I just cooked fast

in a pan with coconut oil.

Cooking’s not Rocket Science, but it can take practice to get in the Mind Set of always having ingredients on hand, scheduling the time, and planning.

Let me leave you with a Motivating Success Story and the phrase, ” Your body is a Chemistry Set, not a Math Equation”:

Hey Debbie, I would like to thank you for introducing Paleo to my life. Today officially I have lost 10 lbs since your Paleo Christmas party. My husband lost more than 20 lbs and he doesn’t even work out !
So thank you very much! Xoxoxoxo