Where’s Mark’s Man Post?  It was due on April 13!  We hit a snag with our weekend plans.   Our epileptic daughter Amanda ended up in the hospital much of the weekend with “break-thru” seizures.  She’s pretty beat up.  She was put on a new anti-seizure drug a month ago which caused such a depressive state of mind;  she quit cold turkey last Sunday.  She should have weaned off the brain med; however, she’s had plenty of seizures when she’s been on her meds too.

Epilepsy Sucks.  That’s all I can say.  No, actually, I have to say she’s amazing.  Last night, after a she got home and took a nap, because there’s no sleeping in a hospital, she worked on a problem set due at 11 today.  And this morning she’s going to get up and make the walk across campus for her 11 o’clock class.  She’s the toughest person I know.

In honor of meds causing side effects, today’s post will be about constipation, Miralax, and it’s dangerous side effects; inspired by the lady in the bed beside Amanda.  Her name was Susan and she had a brain tumor that was causing seizures.  Her most recent seizure, that landed her in the hospital, was “different” .  Her words.  (There’s ZERO privacy in the rooms, so I heard all her conversations with the doctors, plus her conversations with her husband and daughters.)  Susan’s on Miralax twice a day, and has been for MONTHS, and Colase, once a day, but now will take that twice a day also, per doctors orders.  Poor thing can’t poop, probably a combination of her meds and Standard American Diet (SAD).  ( She was eating pudding, fiber cereal, and pancakes, with a diet pepsi, in the hospital bed.)

Did you know Miralax, an incredibly common laxative, has had a FDA warning on it since 2011, stating that it’s correlated with “NEUROPSYCHIATRIC EVENTS“?  Besides Miralax, this warning also applies to these other meds:  Movicol, Dulcolax, Colyte, Colovage, Co-Lav, Clensz-Lyte, ClearLax, GoLYTELY, GaviLyte C, GlycoLax, Go-Evac, GlycoPrep, E-Z-Em Fortrans, Halflytely, Lax-a-Day, LaxLyte, MoviPrep, Macrogol, NuLytely, OCL, Peg-Lyte, Prep Lyte, Softlax, TriLyte, and all other brands with Polyethylene Glycol 3350 (PEG for short) as their active ingredient.   PEG breaks down to toxic byproducts that first affect the central nervous system (CNS), then the heart, and finally the kidneys.

People give this stuff to babies and children, with a doctors blessing. Please read on, because American’s spend more than $700 MILLION on laxatives a year, and STILL remain the most constipated people on earth.  We’re also the most medicated people on earth, consume the most fiber supplements, and consume the most high carbohydrate fibrous grain products.  Not the most Fruit, Vegetables, Water, or Probiotic Foods,  which are actually the Fix For Constipation.   Of course, there’s not a lot of money to be made on Real Whole Foods, so Big Phuvernment’s* not going to be pushing that real hard any time soon.

PEG is classified as a “NeuroToxin”.  The scary term, “neuropsychiatric events”?  That means “neurological conditions”, such as autism, MS, Alzheimer’s, dementia, Parkinson’s, seizures, etc.  (Miralax and it’s sisters work by artificially stimulating the nervous system so that you can squeeze out a poop. Apparently, listening to Susan, it doesn’t always work.)  PEG has several other side effects that don’t include the Nervous system, and I hope you read about them all here; medications always come with side effects, even meds that are deemed so normal that they have a tag line like this:  “MiraLAX® is safe and effective – and available without a prescription.”  It’s not safe.  The FDA has ONLY approved it for adults, and ONLY for a maximum of 7 days.  Pregnant women and children who’ve used it should be very worried, as it’s consequences for small, undeveloped or developing brains is very serious.  Please read the full report here.  There’s this blind trust that we’ve put in the medical system and pharmaceuticals that is very, very undeserved.  Know what you’re putting in your body!

There’s NO MEDICATIONS that don’t have SOME negative effect on your digestive system: they either slow motility of the bowels, or affect the pH of the gut, or both.  And I mean, NO MEDICATION.  Some of the worst offenders?  Anti-depressants, pain meds, antibiotics,  and diuretics.  Again though, Every Single Medication affects the gut in one way or the other.

Some people are going to read this and think, No Way.  If the medication was that bad or that dangerous, it wouldn’t be on the market.  Wrong.  Money Talks,… loudly.  In 2012 a petition was filed with the FDA in an effort to get PEG out of our medicine and FOOD supply:  For the pdf look here.

“As of March 2012, the FDA Adverse Event Reporting System showed 2257 reported adverse events related (in any way) to PEG products – up from 7 in 2001. Included in the adverse events reported are serious kidney, urinary, bowel, blood, skin, and neuropsychiatric symptoms – and at least 3 children’s deaths.”

Note the word, “products”, because PEG’s not just in laxatives, it’s in several other products also:  “food grade polyethylene glycol (under the Carbowax Sentry trade name) is commonly added to chewing gums, table-top sweeteners, and energy drinks. It is also used as a base in solid and liquid soaps, shampoos, bath and shower gels; body and face creams and lotions; toothpastes, ointments and suppositories; as a tablet binder in drugs and supplements; as a lubricant in vaginal gels and eye drops; and as a solvent in cough medicines and elixirs. ”

The resource for this post is a scientist named Konstantin Monastyrsky.  He runs a site called “gutsense” and it contains more specific and applicable information about the gut and constipation than I’ve seen anywhere else.  You should really check it out if you want to learn the super gritty nitty details of what you can do if you have chronic constipation.

In the meantime, what about Amanda’s reliance on pharmaceuticals for her epilepsy?  We can’t stand it.  She’s been on a pretty solid ketogenic diet for almost a year, and she doesn’t drink alcohol, which has to help, but she’s in college.  College life is NOT conducive to epilepsy, at all.  The stress, the deadlines, the lack of sleep.  We feel tied to these horrible drugs yet want more than anything to get off them.  In her own words, she “wonders who she is if she wasn’t on brain medications.”….  We’ve been seriously investigating Medical Marijuana, which isn’t legal in Virginia yet, but hopefully will be soon.  What is legal is Hemp oil ( it’s lacks THC, which is the illegal substance, and contains Cannabidoil, which is deemed by some scientists to be the most Anti-Inflammatory substance in the world.)  We’ve ordered some and will be trying this in conjunction with her meds.   We’ve got to get the laws changed so that more studies can be conducted in the US.  Other countries are light years ahead on this and so far, the science looks incredibly promising.  All neurological conditions and cancer seem to be the main focus, and there’s some great information on this site here. 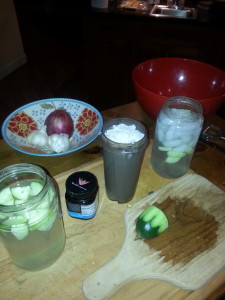 The two jars next to it are my waters that I take with me, and that little jar?  Manuka Honey – a powerful antibiotic honey from New Zealand.  Great immune booster:)