Did You Know That Much Of Our Chocolate Is Produced From Child / Slave Labor? It’s True.

Food is Cheap and Food is Easy, which is one of the biggest reasons we have such a weight and health problem in our country.  Such painless availability takes away the restraints from yesteryear:  dessert after dinner a few nights a week;  no eating between meals,  and special treats were “special treats”.  Not anymore.  Food is Big Business.  Desserts/snacks/treats are Big Business.  Chocolate is Big Business.  There’s a reason Chocolate is so cheap and available; reading this will help you become more disciplined about your chocolate consumption, I promise.

This isn’t a post about candy causing cancer and chronic disease. This is a post about being choosy about the chocolate we buy, because MUCH of the chocolate produced in the world is a product of Child Slave Labor. Cocoa is a very hands-on crop, so we’re talking intense, manual, dangerous labor.  ( resources to follow )

Take a moment to learn what’s going on, because we can make a difference with our wallets. ( and effect our weight and health also.)

The worldwide demand for chocolate is enormous; the chocolate industry grossed over $80 BILLION in 2010; more than $20 billion of that was sold in the U.S.  The majority of the worlds chocolate is grown in West Africa;  72% of cocoa beans come from the Ivory Coast and Ghana. Other producers of cocoa beans are Indonesia, Cameroon, Nigeria, and Brazil.

Popular and familiar brands, like Hershey’s, Mars, Cadburys, Nestle, Lindt, and Ferraro, the world’s top 6 chocolate companies, have all been accused of contributing to child/slave labor. They’ve acknowledged the fact, and except for Cadbury’s, have pledged to source their chocolate ethically by 2020.   This means in 2014, cheap chocolate is very possibly “blood chocolate” (you saw that Leonardo DiCaprio movie, Blood Diamond, right?)

The scoop:  children from all over West Africa are either being sold by their own families (for as little as $30) or stolen by slave traffickers, and sent to work on cocoa farms. The Ivory Coast alone has more than 600,000 cocoa farms.

The average farmer in the Ivory Coast – not laborer – makes between $2 and $4 a day.  With revenue like that, and with such enormous competition, he’s compelled to find the cheapest labor possible, which is child labor. Best current estimates are that at least 200 thousand, but possibly a MILLION children are currently forced to work on cocoa farms.  These children do get paid, a few pennies a day.  They’re fed the cheapest food possible, mostly corn gruel and bananas, and most are offered little to no education.

The production and harvest of cocoa is difficult and dangerous. Because of the wet, muggy climate, bugs are a real problem.  Cocoa is a HEAVILY sprayed crop; toxic pesticides are sprayed on the plants by the children in NO protective clothing.  The pods are both cut off the trees and split open – by the children – with Machetes.  There are no cocoa pod harvesting machines, none.  It’s all manual.  Most of the children have scarring from the machetes on their arms, legs, and faces.  Most children are between the ages of 12 and 16.

Beatings for not meeting quotas are the norm.  A bag full of cocoa pods generally weighs about 100 pounds, and must be dragged – by the children – from forest to the pick up point.

This isn’t New News, this is Old News. World Vision leader on trafficking Ruth Dearnley said the international chocolate industry acknowledged in 2001 the use of trafficking and child labour in cocoa harvesting, and made a commitment to eradicate it.  So far, little has been done by the big 6. (The Sugar Industry isn’t much better. Cheap food is cheap for a reason you know.)

What can we do?  First of all, spread awareness to our kids, our friends, our circle.  The origins of our food matters. The quality of our food matters.  There’s a documentary called The Dark Side Of Chocolate, and while it’s pretty disturbing, I think it’s important that we all know that food doesn’t magically appear in the grocery store.  There’s a story behind everything we eat, and we should know that story.

I’m not saying to give up chocolate, I love chocolate!  I’m saying we need to be incredibly picky about the chocolate we buy, and make sure our kids know why.  We’ll be paying more, but the farmers and the laborers producing our chocolate will be paid living wages.

Who to buy from? Not the main stream brands, at least not for a while.  They’ve already failed to meet the higher standards they’d promised by 2005; so their new 2020 date is a “believe it when I see it” situation for me.  Luckily, good chocolate companies are easy to find.  Here’s a some suggestions: 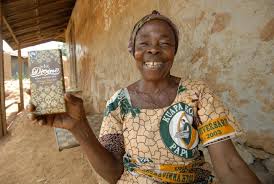 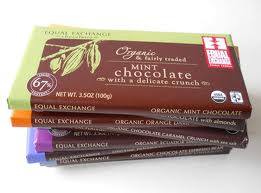 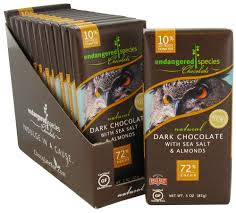 Everything we put in our mouth makes us either healthier or less healthy.  Chocolate can actually be part of a healthy diet thanks to loads of antioxidants.  Know where your chocolate comes from, we don’t want to support slave labor or starving farmers!  Know what’s added to your chocolate, in it’s natural state it’s incredibly bitter and most of us have been acclimated to chocolate that’s heavily sweetened with sugar and fluffed up with soy, emulsifiers, added flavors, and even chocolate scent. Woops, this isn’t supposed to be about cancer or chronic disease.

Watch the documentary if you get a chance, what an eye opener!