I’ve got some questions that aren’t personal, just nutritional, and good, so I’m going to answer them here instead of replying to the specific posts.

The first one was “what do I think of the Glycemic Index”?   A little FYI, the Glycemic Index rates how quickly 50 grams of the glucose in a food goes from mouth to blood stream, and it’s referring to the effect that those foods would have on blood sugar and insulin.  The standard of measure is 50 grams of table sugar, or white bread,  (Fifty grams is about 10 teaspoons.), this reference food  is given an arbitrary value of 100.  The GI value of a specific food is expressed as a percentage of that arbitrary rating.  The higher the percentage, the greater the surge in blood sugar.   Diabetics are encouraged to use the GI scale to determine which foods are safe for them.

I’m not crazy about the GI scale and here’s why.

50 grams of a food is a LOT, that would be 10 to 12 carrots, to give you a visual.  The scale rates homemade ice cream as LOW (1 -39%), table sugar and spaghetti as MEDIUM (40 to 69%), and carrots, watermelon, and corn as HIGH (70 to 100%).  The ice cream got the low mark because the fat and protein in it slow the absorption of glucose from the intestine to the blood stream, but ice cream is NOT a good food for diabetics or anyone trying to lose weight. Spaghetti, which gets a MEDIUM, and therefore a “kind of okay” nod, is NOT okay for diabetics or anyone trying to lose weight; it’s too many carbs, most of which will be turned into triglycerides (unless you’re a young, male, athlete).

Carrots, corn, and watermelon, Real Whole Foods loaded with vitamins, minerals, and FIBER, should be included in our meals because they contribute to the nutrients our body needs for repair, maintenance, and thriving.

Foods/carb foods,  eaten in the context of a MEAL that contains fat and protein, as opposed to by themselves, ALWAYS absorb more slowly – and that’s a good thing.  We want our blood sugar to absorb slowly as opposed to quickly and causing a high blood sugar that needs to be met with high insulin.

High blood sugar and High insulin are DAMAGING to the body:  nerve cells on the extremities, the organs, the eyes, the skin, the brain, and the arteries take a HIT.   The amount of inflammation this causes is deadly.  Excess blood sugar, of which our body needs VERY LITTLE, gets turned into TRIGLYCERIDES, and mostly deposited in the abdominal area.

I think a much better way to “pick your foods” is to look at Nutrient Density, which you’re ONLY going to find in Real Whole Foods.  Pasta and bread have little to no nutrition; the high carb count causes just about everyone to convert at least part of those carbs to fat; and there’s little to no satiety from foods that are so highly processed.

Next, I was asked if Expeller Pressed Canola Oil is okay for salad dressings.  Canola oil is a tricky thing.  It’s an Omega 6 oil, which most of us get way too much of in relationship to the amount of Omega 3s we consume.  We should consume O6:O3 at a 3:1 and some say a 1:1 ratio.  In the US, we’re waaayyy off that with our high consumption of vegetable oils;

statistics say we’re between 10:1 to 20:1.  Not good.  Huge negative implications for our health.  Vegetable oils/Omega 6s are very very delicate and prone to damage with any kind of heat and oxygen, this is why cooking with them is a bad idea.  Expeller pressed means “not heat extracted”, which is good; but it’s still an Omega 6, and still prone to damage from the air.  Canola Oil doesn’t have many nutrients or benefits, unlike Olive oil, Walnut oil, or coconut oil.  These oils are very nutrient dense and help that O6:O3 profile.  I say ditch the Canola Oil for an oil that provides more health benefits. 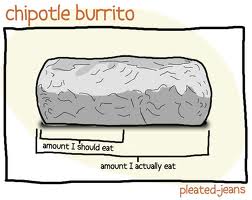 One more question, about Chipotle;  is it Healthy?  I did a little digging, and I have to say, I’m disappointed.  Their marketing says they want to use at least 50% local and organic WHEN IT”S POSSIBLE.  They are TRYING to source clean meats when Possible.   I like to think they have good standards and intentions, but they are a business, and they do need to turn a profit to keep running.  Let’s call Chipotle a healthier option than other fast foods.  HOWEVER, stick to the meat and vegetables!  Get a burrito, chips, rice, or any other processed grain product, and you’ll consume a boatload of carbohydrate that turns into belly fat.  Make good choices!