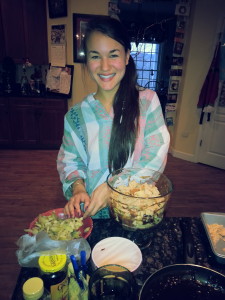 Just 2 days til Christmas and I’m so excited!  Not much time to write, but I do want to pass on a beautiful and delicious dessert idea, and a few success stories.

The picture posted today?  That’s my number 3 daughter Macy, who made Paleo Carmel Apple Bars, but instead of bars,

she did it trifle style.  It honestly tastes as great as it looks.

And just in case you haven’t been sticking to a Paleo Diet for the Holidays, here’s a few success stories from Mark’s Daily Apple.

You can change yourself.  Dieting won’t do it, but working on your mindset will.  Our actions are belief driven.  If you really believe that crappy food loaded with flours, sugars, hydrogenated oils, and chemicals will damage, hurt, and eventually kill you, you’ll stay away from them.  If you think your weight is just a reflection of ‘calories-in, calories-out’, you’ll be like the near-100% of all dieters, who lose weight just to gain it all back again.  Here’s a post on my own story.

To channel Charis again, think about what you manifested this past year.  Now my own thought: what do you want to manifest in 2014?